I wanted to discuss this topic as a separate post.
This is written from a personal, purely speculative perspective.

Some of you may have read about the new pricing plan for Auvi-Q, which includes a "list price" of $4,500. That has prompted many to wonder, "What in the world is up with the $4,500 list price?!"

Yes, that sounds like a lot of money. That is a lot of money, but bear with me for a minute. I'm not surprised that many would find this list price shocking, but we need to understand how flawed the current pharmaceutical system is, at present. For those who watched the Mylan CEO senate hearings, we had a glimpse into the convoluted, opaque system. There is a complex interplay of parties like Pharmacy Benefit Managers (PBMs), insurers, pharmaceutical companies, etc. Here is a primer on the drug-pricing system, as it stands.

I will admit that my eyes look upon the Auvi-Q very favorably. From the moment I saw the device, I was impressed with its size and features. I also feel favorably about Eric and Evan Edwards' direct ties to the anaphylaxis community and their personal story. They are connected and invested, both financially and emotionally. I assure you that this fondness was not paid for with the Sanofi Summit I attended years back. That summit was the seed that sprouted so many wonderful things in my life, so again, there's a fondness there, but it is not something that would prompt me to favor something I didn't believe in. So, when I say that "in my eyes," I feel like kaléo is doing their best to provide the choice and access we asked for, to the best of their ability, given the complicated environment in which they have to operate, I hope it is not dismissed as detrimentally biased.

Some have expressed concern that with such a high list price, insurance companies will choose not to cover the Auvi-Q. This is not a foregone conclusion. I was previously on a medication for my rare disease that cost my insurance company over $8,000 per month, which would have been over $96,000 for the year had I continued on it. (I had to stop due to side effects.) I paid $0 out of pocket, as my $45 insurance co-pay was covered by the specialty pharmacy handling the medication. I remember being quite shocked at such a price. I remember shaking my fist at the first report we saw stating that the list price was set to be around the $100,000/year mark. I felt guilty for "costing" my insurance company so much money. However, I soon learned that my medication and its cost were not at record-setting levels. I found out that there are quite a few medications that cost even more outrageous amounts of money. I called the specialty pharmacy and I called my insurance company to make sure that my rates were not going to go up and was assured that my rates would not change. I also considered the fact that many of the people with my rare disease either did not have insurance or had poor coverage. My insurance coverage was basically subsidizing their access to the medication. Perhaps others feel differently about such things, but I was happy with that arrangement. Anyone who needed that medication would have access. I knew the money had to come from somewhere. I did feel a little less gracious about their efforts, though, given that I knew this was an existing drug that was "re-purposed" to treat our rare disease, so I did feel a little grumpy about them making so much money off something that already existed. I was grateful, though, that the medication was being made available, because there are few alternatives for my condition.

With the Auvi-Q, though, I feel things are different. This is not a 20-30 year old drug, like mine was - this is a new(ish), brand-name device. It's an innovation in its market. They haven't had decades to recover R&D costs. It's reasonable for them to expect some form of profit. Yes, it does seem startling to think that some people's insurance will fork over thousands per set, but this is the system we have and it's holding hostage the device we want. Until the system gets a complete overhaul, this is the space they're working in to provide us access. If we don't like it, we need to continue to take it up with those who can make changes. I'm pointing my dissatisfaction at the system and not at kaléo. Maybe that's because they have something I want, but as I said, this is my personal opinion.

As for how this pricing plan will work, I do not know the following for a fact, but this is my estimation of how this pricing plan will be solvent:
I agree that the system is broken, but until the system is fixed, I believe that kaléo is doing its best to work within this flawed system to do what we asked of them - to provide epinephrine access to those who need it. The laws around medications are intricate, perplexing, and in many cases counter-intuitive. Perhaps some day the system will be fixed and this kind of pricing format will not be necessary, but until then, we need protection. We need a device that we feel comfortable with and that we believe our children will willingly carry and use if the need arises.

I was discussing the list price controversy with someone and another point occurred to me. They said, "Weren't people up in arms about the EpiPen having a high list price? Isn't this even worse?"

Is the list price higher? Absolutely, but I see one big difference. With the EpiPen, the list price was rising over time and an increasing number of people ended up on high-deductible plans. This resulted in the customer paying the high list price, which is when the voices of dissatisfaction rightly grew louder. Mylan didn't do anything with their rising revenue to significantly ease the burden that the patient was facing. Kaléo, on the other hand, is using the high list price to keep the cost from falling onto customers. I agree that the fact that Kaléo has to resort to such measures shows that major reform is needed.

Disclaimer: This post contains information that I am providing to the best of my knowledge. Many details are currently still in flux and information may change. Ultimately, your insurer and/or kaléo will be your best source for final clarification and this information is provided as a courtesy to help navigate the often muddy waters of insurance coverage. 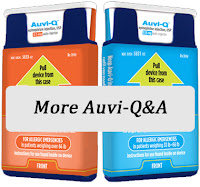 In my previous post, I provided information on Auvi-Q's upcoming re-launch. Please read that post, first, for an overview. Also please make sure to read the FAQ provided by kaléo. This post will deal with additional details and questions that have arisen.

Have more questions? Please let me know!
Update 2/7/2017: We had an allergist appointment on 2/4 and I submitted the form for direct delivery to our allergist. The allergist's office submitted it to see if it could be processed ahead of the 2/14 release date and it was processed, today! I just received a call and was told that my prescription was processed. Premier Specialty is the pharmacy that will be handling my prescription (I am guessing this can vary by state/plan.) They checked to see if the Auvi-Q is covered by my insurance (I have Highmark Blue Cross/Blue Shield with CVS/Caremark for prescriptions) and they said it IS covered, with a $45 co-pay. They said kaléo is covering the $45, so it will be $0 to me. It will be shipped out on 2/14 and should arrive within 48 hours. I was asked if I wanted to sign for it, but I declined. I am usually home, but don't want to miss the delivery. They also offered to let me speak with a clinician or a nurse about the medication, but I declined, as I am familiar with epinephrine and the Auvi-Q, itself.
No comments:

Fans of the Auvi-Q will be in for an exciting Valentine's Day treat! 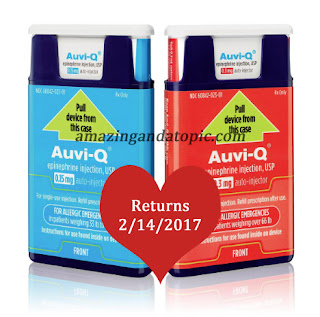 "After regaining the rights to AUVI-Q, kaléo conducted a thorough manufacturing assessment and invested in new technology and quality systems to ensure accurate, reliable and consistent delivery from the product. AUVI-Q is manufactured on an intelligent, high-tech, 100% automated robotic production line with more than 100 automated quality checks on each AUVI-Q, ensuring a streamlined and consistent production process."

Now, let's talk about how you can get the Auvi-Q back into your anaphylaxis preparedness kit!

Through kaléo's first-of-its-kind AffordAbility™ program, they are providing extensive, affordable access to the Auvi-Q for patients. Here are some of the highlights:
For starters, check out their FAQ, which covers the basics of the AffordAbility™ access program.

Here are some other points to keep in mind:
As with any new program roll-out, there will be a learning curve along the way, but I feel that this new program offers several paths to getting a state-of-the-art device into the hands of those who need it. For those unfamiliar with the Auvi-Q, please check out one of my previous posts to learn more. (Please note that any pricing/availability information on prior posts will be out of date.)

Here is a follow-up post with more details.
No comments: