There's so much to cover...where to begin?  My daughter's last blood testing was done at age 2 3/4 (2 yrs. 9 mos.)  I considered waiting until she was 4 years old to re-test, but then I realized that I wanted to test before she turned each new age, because she was a November baby and if/when she attends school, I want to have her latest allergy information available before each school year, if needed.  So, I think we will be on a summer "testing interval".  Plus, my testing schedule was precipitated by a "sale" on the uKnow peanut component test at an allergist's office that was closer to where we live.  We had been traveling across town to see an allergist and he was nice, but didn't have very much time for us during visits and his office staff was extremely unresponsive.  For example, I had requested my daughter's medical records, as I do with all of her providers and I did not hear back from them and that was several months ago.  I called back a few times and left messages, but was never contacted.  I also sent them an email asking about the new peanut component test and was never contacted about that, either.  I'm sorry that the allergist has to suffer for his staff's shortcomings, but anyway, it's also easier on us not to have to drive across town for each appointment.  I visited the new allergist, myself, because I had broken out in a few hives on my face, which had never happened to me, before.  It happened a second time, and that's when I made the appointment to be seen.  I wanted to have it checked out and I figured it would allow me to get a feel for the allergist, to see if I wanted to switch my daughter over to their practice.  They did a skin prick test, which will be the subject of another post, and I was pleased with her credentials as both a board certified allergist AND a pediatrician.  She also informed me of the aforementioned sale on the uKnow peanut component test and I was "sold"!   I will also have to have another blog post about that test.  See, so much to discuss, and I haven't even reached the point of today's post!

So, my main goal of the appointment was to get the uKnow peanut test done, while it was on sale, but to also bring the new allergist up-to-speed on my daughter's history and see about re-evaluating her long list of allergens.  Many of them had such low values that I wondered if we really needed to be avoiding them.  The one I was most curious about was wheat.  Her "highest" blood test value was 4.22 and I recently found out that the threshold for a true IgE-mediated wheat allergy is 26, with 74% predictability.  As I've said, I'm not too concerned about not having fed her wheat all this time, as I think her gluten-free diet has been just fine, but in retrospect, I feel that I have been overly concerned about being completely gluten-free.  It's obvious that wheat is not an anaphylaxis risk for her.  We have gone to the park to feed the ducks, and she has held pieces of bread and thrown them to the ducks.  One time, when she was much younger, she even inadvertently put a piece I gave her into her mouth, instead of throwing it into the pond.  I immediately told her to spit it out, but nothing happened.  Zero reaction.  When she was a baby, she ate those little baby crackers that were made of wheat and never had a reaction, other than possibly eczema, which could have been caused by a number of other foods in her diet at the time.  So, I asked the doctor about wheat and she said she thinks that my daughter should be just fine eating wheat.  That is HUGE news!

Now, I have had this information for days, but I still have not fed her any wheat.  I think many of you can understand my apprehension.  We've been avoiding wheat for at least 2 years.  Even though I know that it's not an anaphylaxis risk, it just makes me nervous.  I'm also trying to decide what food item to use for the first re-introduction.  I can't just use any ol' piece of bread, because so many loaves are made on lines that also process milk and nuts.  There's also the sesame issue.  When we were trying to identify other things that were aggravating her asthma/eczema, we tested her for things, including sesame.  That came back positive, with a value of 15.5.  She has never had a known, serious reaction to sesame, but I'm not sure what to do about it.  I avoid sesame, when I can, but it hides in so many things.  I need to ask the allergist how to proceed with that one.

Anyway, I feel like I have to decide on a trial wheat item and give her a the food item and give myself a valium.  (I'm KIDDING!)

It's just that whenever I think about trying a new food item, in the days leading up to it, random things will happen, like she will cough at night, or break out in a mystery rash from environmental triggers and I will tell my husband, "see, if I had already given her the new food, I would have been blaming these symptoms on the new food..."  It just makes it so hard for me to work up the nerve, even though the risk is low.  The allergist assured me that she doesn't think my daughter has redeveloped an allergy to wheat, after avoiding it for 2 years, but we should have the blood tests back next week.  I'm going to wait until those results come back, because a few more days won't hurt.  She also assured me that wheat should not aggravate her asthma.  Mostly, I just want to be able to add foods into her diet that have traces of wheat or wheat ingredients.  I don't think she needs a ton of wheat in her diet, but it just might give her a little more variety.

So, the allergist's recommendation is to trial a new food and give it a 2-week interval in between, so I might try and add in something else, while waiting on the courage to add in wheat.  There are so many foods that tested really low that I could start with, first.  Her eczema was doing a lot better, until this massive heat-wave hit and I know that's not food-related, so she might as well eat some new yummy foods.

OK, sorry for the long "dear diary" post, but I had a lot to cover, and there's still more to come!

I wanted to share some information about these products with you, because I think they are just great for kids with eczema.  (Actually, they are great for ALL kids, especially those who don't want to sit still while you slather them with sunblock.  Plus, it never washes off!)  As you may well know, it can be so hard to find a safe, gentle sunblock for our children's sensitive skin.  I have gone through a few brands and used California Baby for a while, but I think it irritated her a little bit.  The best solution is actually to not have to put sunblock on her skin, if I can avoid it, in some areas.  That's where the UPF 50+ clothing comes in...

I got my daughter a new set of Sun Smarties gear, since she has outgrown her set from last year.  They have an Ultraviolet Protection Factor (UPF) of 50+, which means they block out 97.5% of the sun's ultraviolet rays.  They have zip suits, hats, and shoes, to keep your child covered head to toe, which they are probably accustomed to, anyway, right? ;)  The material is breathable and light and my daughter loves the fun colors. 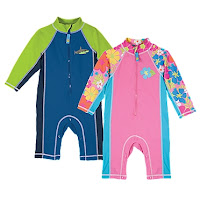 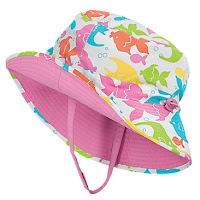 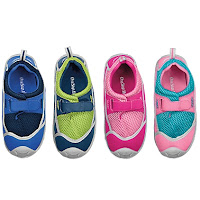 Here is the set in action: 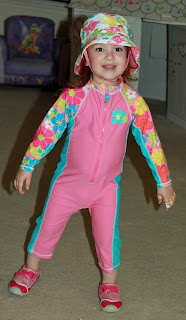 With her hat, zip suit and shoes on, I only have to use a little bit of sunblock for the exposed areas and the spots where the clothing might shift and expose her skin.  I typically coat her in a layer of Aquaphor ointment, to protect her skin and keep the water out, so her skin is not completely unprotected, of course.  This just helps me avoid having to reapply layers and layers of sunblock.

This is her go-to outfit for our trips to places like Sea World, the San Antonio Zoo, Morgan's Wonderland (we live in the San Antonio, TX area and are very lucky to have nearby access to all these great places!) and I love these outfits, because they make a quick transition from regular fun-in-the-sun to water play.

I even bought a UPF top for myself from Coolibar.  They aren't cheap, but I also enjoy not having to pour on the sunscreen on top of everything else I have to do to get ready for a day in the sun.  I see it as an investment in my skin's future health.  Dermatology visits are very pricey.

Another option I recently found out about are Sunny Sleevez.  It's a UPF clothing option that can be added onto your child's (or your own) wardrobe.  If you're wearing a short-sleeved shirt, and you decide to head out into the sun, just pull these on over your arms.

Here is some information from the Sunny Sleevez's site:


It's pretty hard to find long-sleeved shirts at the store, in the summer and these are cooler and more breathable than Baby Legs.  (Sorry, Baby Legs, I loved you for so long for protecting my sweet baby's little legs, but you are just too warm for this Texas heat!)  I see Sunny Sleevez as "sleeve extensions" that provide simultaneous scratch and sun protection!
If you know of any other UPF clothing options, I'd love to know about them!

We also got a new product from Sunny Sleevez - their Color Change Necklace.

It's pretty cool! First of all, my daughter loves butterflies, so she loves to wear it and the "white" beads react to the UV rays and deepen in color depending on how strong the sun's rays are shining.  When the beads change color, we know we need to put on our Sunny Sleevez and/or sunblock! :)

I also bought a pair of white adult-size Sunny Sleevez for myself, to go with my short-sleeved shirts, to save from having the put on sunblock, on the days when I am not going to be in the sun all day long and don't want/need to wear the Coolibar shirt.

You can also check out my follow-up post, for more skin-protecting gear!