If you missed last year's post on UPF clothing, please check it out, but I wanted to provide some updated information.

I share information about these kinds of products, because this subject is pretty important to me.  I don't think people are really aware of how damaging the sun's rays can be and they are only getting stronger.  I spent so much time reminding my mother to stop trying to "tan" her fair skin, telling her it just wasn't going to happen.  She would only achieve varying shades of pink and red.  I told her that if she changed colors, it's because she was burned, but she wouldn't listen.  She would slather on baby oil (*cringe*) and basically fry her skin, in an attempt to get a "tan".  My protests were in vain and year in and year out, she would burn.  A few years ago, I noticed an odd growth on her cheek.  It grew and grew and until I convinced her to get it checked out (which was not an easy thing).  Sure enough, it was skin cancer.  Luckily, it was "only" basal cell carcinoma, but she had to have the cancer surgically removed from her cheek.  We started going to the dermatologist, regularly, to check for other cancers and several benign growths were found and removed.  I noticed a suspicious spot on her back, one time, and pointed it out to the dermatologist, who missed it during his inspection.  He used his special viewing tool to get a closer look and agreed that it needed to be removed and sent for analysis.  The results came back and it was a very early melanoma.  We got very lucky, and caught it early and it was removed in its entirety, but now we will be on the lookout for more, for the rest of her life.  (My mother is sight-impaired, so that is why I state that "we" will be looking for them.)

So, when you go out in the sun, for the love of your children, wear sunblock on yourself (so you can be there for them down the road) and most certainly consider covering your kiddos as much as possible to protect them from the sun's UV rays.  We just didn't know better when we were kids, but that is no excuse, these days.  Furthermore, I have had far too many sunburns in my life, with at least 2 of them being blistering sunburns.  Have you had one of those...the kind where you can't stand for your shirt to be touching your skin, it hurts so much?

*Owie* According to the Skin Cancer Foundation:

About 10 or so years ago, I finally learned to take better care of my skin.  I don't think it's ever too late to make changes for the better.  (Another tidbit from SkinCancer.org: "Contrary to popular belief, 80 percent of a person’s lifetime sun exposure is not acquired before age 18; only about 23 percent of lifetime exposure occurs by age 18."  Therefore, there's still plenty of time to change your ways!)  I also know that I can start off right with my daughter's skin health.  She already had to endure the use of topical steroids for her eczema, so I must do all I can not to add to any additional risk factors.

I went to get a new set of Sun Smarties for my daughter, for this year's activities, however, but the zip suit is no longer available.  Her shoes still fit, thankfully.  I headed on over to Coolibar, where I bought my UPF clothing, to check out their children's wear.  I was very happy to find this Girl's Neck-to-Ankle Surf Suit. 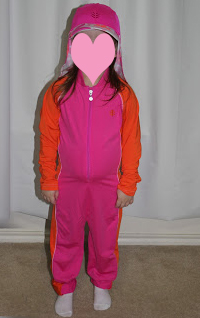 It provides even more coverage than the Sun Smarties outfit did!  I am so grateful that my daughter doesn't mind being completely covered.  She has always grown up wearing this kind of "swimsuit" and doesn't think anything of it.  I know I won't be able to control her wardrobe, forever, but the longer I can keep her skin protected from sun damage, the better.

(Edited to add: I wanted to add that I understand that not all children will tolerate being fully covered, either for sensory processing reasons, or any number of other reasons, so if you cannot cover them, and can apply sunscreen, safely, please remember to do so at least every 2 hours, no matter what the activity (water play, on dry land, etc.)  My daughter sometimes has an issue with tags in clothing, for example, and certain clothing textures, but she never seems to have a problem with her UPF clothing, thankfully!)

I also bought a second outfit, a two-piece set.  I bought these in a slightly larger size, so we can use them for two seasons, since they are not the cheapest of outfits.  As I've said before, though, I feel that it's well worth the money and cheaper than the treatments that would be necessary down the road, if her skin was not protected. 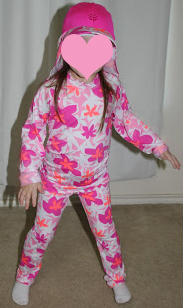 My daughter loves wearing her swim clothes and even though we live in the super-duper hot state of Texas, she does not get overheated in these outfits.  They breathe well, and I also feel surprisingly cool in my Coolibar clothing.  Here's a shot of me sporting a Coolibar top and leggings, to which I added some shorts.  I have never been the "Itsby Bitsy Teeny Weeny Yellow Polka Dot Bikini Type". ;)

Even if you don't feel like going to the beach as covered as that, Coolibar carries plenty of other dresses, cover-ups, shirts, etc.

I hope I haven't nagged you all too much about protecting your skin, but I think we can all agree that it's pretty important to try and protect our body's largest organ! Whatever you do this sunny season, be safe and have fun!