The following is a guest post by my fellow Allergy Mommy friend, Katie.  Her son is 3 1/2 and has multiple food allergies, along with an allergy to fire ants.  Many thanks to my sweet friend for sharing tales from her travels, to boost my confidence for future trips! 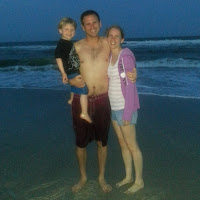 My son Edan was born in March of 2010, as perfect as his name implies. ;) He took his first plane rides that year, one for vacation in Colorado and another to celebrate a friend’s wedding in Door County, Wisconsin. Our little guy seemed well on his way to becoming a master of travel. Then, after our world was turned upside down by his allergic reactions to peanuts, eggs, milk, and fire ants in 2011, we did not take another vacation until this summer in 2013.
My husband signed up for a conference at a resort in Florida, and the first time he offered to take us with him, I laughed. Do you have any idea the kind of preparation that would take, not to mention the increased risk, both in the airplane and once on the ground? My anxiety, well-developed over the last two years of dramatic diet changes and watching my son’s body swell and erupt in hives over and over again, reached heart attack levels at just the thought of it.
Over time, though, I came around. The opportunity was just too great to pass up, and I did not want to set a precedent of allowing allergies to dictate IF we participate in life’s activities. It was enough that this condition already dictates much of the HOW. I located a Whole Foods and children’s hospital close to where we would be staying, and printed off directions to each from the airport and resort. I also printed a copy of the NIAID’s guidelines for anaphylaxis, since hospitals vary in their familiarity with the current treatment protocols. I created a list of safe meals that required nothing more than a refrigerator and a microwave. I purchased disposable placemats, extra epinephrine, steroids, and large bottles of antihistamine. I confirmed that we would be able to bring these extra liquids on the plane. We found a way to attach the car seat to a suitcase to carry it onto the plane, so Edan’s contact with the airplane seat would be minimized. I learned some new deep-breathing techniques and focused on looking forward to a fun vacation.
The final luggage tally included one medium-sized suitcase full of clothes, another the same size packed to the brim with food, one small suitcase full of carry-on items, and another one packed with medicines and a soft cooler full of food, plus our backpacks which had various other snacks. We had scheduled our flights with Southwest Airlines early in the day, since we were told that this is when the planes are cleanest. When checking in, we received an extra ticket that identified my son as a “peanut dust allergy” customer. I had printed a notification card from TSA’swebsite to identify my son’s allergies, but we were actually never asked the reason for the extra liquids. We declared them by going through a separate line for “medically necessary liquids”, and TSA agents tested the liquids in unsealed bottles with test strips. Once at the gate, we identified ourselves to the attendants at the desk, where we received a “pre-board” pass.
Since we were able to get on the airplane before the masses, we had time to wipe down the area around my son’s seat and install him in his carseat. Although that seat was a pain to carry through the airport, once he was in it I was so thankful we had gone to the trouble. His access to the areas where food contamination was likely was very limited, and he was more willing to stay in his familiar carseat than he would have been otherwise. The flight attendant made the generic announcement that peanuts would not be served on the plane due to the presence of a customer with a peanut allergy. I was touched when he followed it up with a genuine plea to refrain from eating peanut products from the customers’ own stashes of food; he expressed a heartfelt concern for my son’s well-being and appealed to the goodwill of others to help keep him safe as well. I will never forget that. Our flight passed without event, much to my immense relief, and we were ready for our adventure in Florida.
We knew already that despite the luxurious accommodations the resort provided, microwaves did not fall under the list of necessities in paradise. About 10 restaurants were located within the resort, but due to my son’s long list of foods to avoid (including wheat, peas, beans, melon, squash, kiwi, carrots which all cause mild reactions) and the possibility of cross-contamination with one of his severe allergens that he will react to very small traces of (peanuts, eggs, dairy), this did not feel like a safe option. Therefore, we purchased a small microwave to use during our time there, and left it with the resort when we left, in an effort to pave an easier path for future allergic guests.  A small refrigerator, on the other hand, was included in each room, and we were able to request an extra one to hold the rest of our food. Armed with these appliances along with paper plates and utensils, these were the meals Edan consumed for the duration of the trip:

All the produce was bought from Whole Foods once we got there, along with the waffles, coconut water, and chips, but most of the other foods were brought from home. The meats were all Applegate (bought from Whole Foods) or US Wellness Meats (ordered from their website and brought from home). I also had the foresight to bring corn tortillas (Food For Life), refried beans (Eden), and nutritional yeast (NOW) to make my son’s favorite “burritos”, but as it turned out, I forgot one vital tool...a can opener! Luckily we had plenty to eat of the other foods (next time, I will plan more carefully and not over-pack so much), so I didn't have to worry about that one.
Overall, I am pleased with how well this worked out. My son was well fed with safe and healthy foods. Many of these were favorites, and it was a treat for him to get them all in one week. They were all fairly easy to prepare, although I found myself wishing for another couple microwaves every morning. I ate many of these meals alongside him, saving us money on restaurant meals, and saving me the stress of taking my allergic child into a restaurant by myself while my husband was attending presentations.
We had a wonderful time in Florida, and our flights home were just as uneventful as the one there. I was so thankful for the flight attendants’ and other customers’ patience as we throughly cleaned Edan’s seat each time we boarded a new flight. It’s difficult to explain that every time I am wiping down my son or the environment around him, every reaction he has ever had is chugging somewhere in the back of my mind like a relentless train. The hives and mucus that poured from his body the first time he had eggs, accompanied by the panic of mother who had never seen an allergic reaction before...the alarmingly swollen face after a secondhand peanut contact...the vomiting, diarrhea, and hives caused by a trace of milk in a condiment...the quickly spreading rash and gasping sounds of his labored breathing after the fire ant bites...and his terrified cries of remembered trauma that start as soon as we walk into any hospital. This motivation to avoid adding a story to that heartbreaking collection causes me to take a little more care, and then a little more, and these detailed attentions of an allergy mama, knowing that one more wipe can make the difference between health and disaster, can appear needlessly intricate to the outsider. Our endless preparation and loving efforts paid off, though. My proof was when unpacking after we got home, in the discovery of our Benadryl bottle...with the seal still intact. SUCCESS! :)