Researching Beyond the Headlines


Articles are published on a continuous basis, often with sensational titles that are meant to grab the reader's attention in a sea of content. When big medical news "breaks" there is often a rush to "print" and messages can sometimes get muddled, confused, misinterpreted, etc. For this reason, doing our own independent research is imperative. For those who like to while away their "free" time, digging through the internet "haystack," searching for the elusive "needles" of useful, actual, actionable information, here are a few sources that I hope might help in that pursuit...

Google
This infographic is an "oldie but goodie" and merits a second look, if you haven't seen it in a while.
Hack College's "Get More Out of Google" Infographic

Khan Academy
This free site provides lessons on a variety of topics. I was first introduced to it through their offering of coding skills lessons, but they have since expanded their catalog. One notable addition, for our crowd, is the section on Immunology. It's a great primer on how the immune system is supposed to work, and provides a foundation for understanding how atopic immune systems have gone awry.
Khan Academy - Human Biology > Immunology

I've spent many an hour down the rabbit hole that is PubMed! Whenever new information is released, I think it is in our best interest to read as much of the journal article as we can, whether that's the abstract or in some cases, the full study. When reading an abstract, it's best to read it all, and not just the "Results" section, because key details are provided in the Background, Objective, Methods, and Results sections.

For example, let's take the widely misunderstood "Probiotic with Peanut Oral Immunotherapy" study. Some headlines made it seem like all that was needed was a heavy dose of probiotics or yogurt and the peanut allergy would be cured. Let's take a look at the abstract: (highlights added) 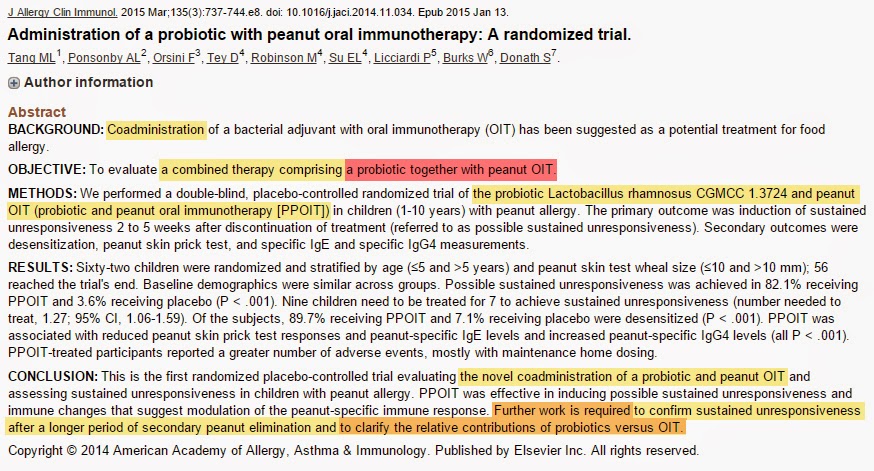 In the "Objective" section, it states that this was a study of a "combined therapy comprising a probiotic together with peanut OIT." I will admit that the wording that follows in the "Methods" section is a little confusing, but it states that probiotics plus peanut OIT was tested against a placebo. It is also noted that they chose the acronym "PPOIT" for their study, which is not to be confused with "Private-Practice OIT." The "Results" section describes the findings, which show that the results were compared against a placebo group, which received no treatment. This was not a study of probiotics vs. probiotics plus OIT, as the "Conclusion" section states that further study would be required for such a comparison.

PubMed's journal articles can certainly come with their own version of spin and untold stories behind the scenes, of course. Even so, that is kept to a respectable minimum and there is so much to explore!

If you'd like a comprehensive tutorial on PubMed, check out the PubMed Tutorial.