I've read a couple of articles, lately, stating that "everyone", even those with egg allergies, should get their flu shot.  I saw this poster from the CDC, but I decided to add my own graphic to it: 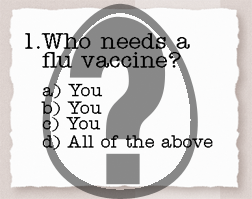 I don't know why the CDC would make such a poster, when even they would admit that not every single person on the planet should get the flu shot.  Most people, yes, but not EVERYONE.

My daughter wasn't diagnosed with food allergies until she was 18 months old.  She had her first flu shot at the age of 9 months.  The third night after the shot, she woke up with a high fever, and was choking, seeming like she was trying to vomit, but couldn't, and was breathing rapidly.  I got her up out of bed, and managed to give her some ibuprofen and held her in the glider for a while.  (I cannot remember if we gave her any Benadryl, as it was a sleepless night and this was before we were as hyper-aware of the signs of anaphylaxis/allergic reactions.)  I stayed up with her most of the night/morning, and she recovered, but looking back, that was most likely an allergic reaction.  Here's an excerpt from the Mayo Clinic website on drug allergy:

My daughter experienced all the symptoms in bold.  I called the pediatrician's office the next morning and they basically said, "Uh huh, OK, that's normal".  They didn't even put it in her medical record. (Which will be the topic of another blog post.)


Flu shots are cultured in egg and sometimes contain egg protein.  At the time, we didn't know she had a severe egg allergy. At her 12-month appointment, it was time for her "second dose" of flu vaccine.  Again, that night, she spiked a high fever and was choking on vomit.  It was a scary night, but luckily, her reaction did not progress.  I try not to think too hard about what could have happened.  I took her to the doctor a couple of weeks later for an ear infection, and she was put on antibiotics.  I can't help thinking that her second flu shot was somehow related.  It's not that I think it specifically gave her an ear infection, but her reaction to it might have contributed to her developing one.

When her 2-year appointment came around, the doctor said she was up for her flu shot and I said, "but she has a severe egg allergy, remember?" and he said, "Ah, yes, that's right, it's contraindicated, never mind."  I was glad I wasn't going to be forced to go through that, again.  My daughter does not go to school, and is at a low risk for contracting the flu.  We, that are around her, (husband, grandparents, etc.) need to get OUR flu shots to protect her, but she will not be getting another flu shot until either her egg allergy lessens, or the need outweighs the risk.  I keep her up-to-date on all her other immunizations, though.  She has asthma, which is aggravated by any respiratory illness that she contracts, but we have always been able to keep symptoms under control with her nebulizer/albuterol.  Personally, I cannot see giving her a guaranteed adverse reaction, in the hopes of preventing an unlikely viral illness.  It could have been the egg, or another component of the vaccine that she reacted to, but either way, for now, it's off the table.  It's important to reevaluate, of course, as circumstances change, but this is where we're at, presently.


"Caution is still advised in certain scenarios. For example, there is still some question on whether people with severe egg allergy can receive the flu shot, he says."

"Is there an alternative flu prevention for high-risk people with egg allergy who are unable to take the flu vaccine? Yes. A high-risk person with suspected egg allergy can use other flu medications within 24 hours of developing flu symptoms. The medication alleviates or prevents the progression of the flu."

(I believe they are referring to TamiFlu, which is what one of our pediatricians mentioned.)