As I mentioned previously, one of my daughter's former allergists had talked about a "newer, better" peanut allergy test coming out.  Then, I came across this post on One Spot Allergy's blog, which discussed peanut component testing.  You can read all about it, there, but the gist of it is, they have figured out which particular proteins are most linked to systemic (i.e. anaphylactic) reactions and which ones tend to cause milder, localized reactions, such as tingling in the mouth.

To remind you a bit about my daughter's history, she has never directly eaten, or reacted to, a peanut in her life, but her peanut blood test values have always been high (75.5@18 mos. and 95.6@33 mos.)  With the threshold for a true peanut allergy being 14 with 100% predictability, we, of course, kept peanuts out of her diet and avoided any and all traces of peanuts.  She also tested highly positive for almonds and moderately positive for walnuts and due to the cross-contamination dangers of other nuts, we avoid all tree nuts, as well.

Despite this evidence, I still wanted to get the uKnow peanut component testing done.  I would sometimes encounter people who would ask, "how was your daughter's peanut allergy diagnosed?"  When I would reply, "blood test," I would get the "Oh..." and feel like perhaps they didn't quite believe that it was real, since so many people still hold on to the belief that blood tests are only "50%" accurate.  (If you feel that way, please go see this other post.)  I must admit that the thought had cross my mind...could it be a false-positive?  What if I was doing all of this work to keep her away from something that wasn't really a danger to her?  I had seen what milk could do to her, but I had never seen the effect of peanuts on her.  I certainly don't want peanuts to "prove themselves" to me, of course.  However, I knew I needed to get more answers.

I didn't allow myself to get my hopes up that it would return an answer stating that she didn't have a peanut allergy, but the test answers three questions, which are basically, as follows:
(1) Are you "sensitized" (what we refer to as allergic) to peanuts?
(2) Are you sensitized to the components responsible for "systemic" (what we refer to as anaphylactic) reactions?
(3) Do you have cross-reactive sensitization to birch or other plants, which would give you the milder symptoms?

We had a playgroup holiday party the day before the appointment to get the results and someone brought peanut butter crackers as one of the potluck snacks.  I promptly asked that they be removed and it was then that I had a fleeting, hopeful thought that I might get news the next day that perhaps she would only show the component for the cross-reactive component and I wouldn't have to be on such high alert for all traces of peanut, but I quickly put that thought aside.

The next morning, we went in for the appointment and we were also receiving other test results, which I will cover under a separate post, but the following are the uKnow Peanut Molecular Allergy Test Results: 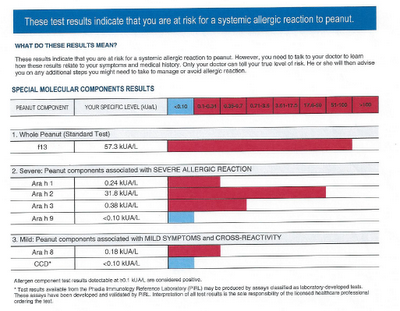 There were the words I knew I would see, but a tiny part of me hoped I would not see:
"These test results indicate that you are at risk for a systemic allergic reaction to peanut."

I asked the allergist about the difference in the "whole peanut" value from her last test, but she said that it just varies depending on the lab and that the change in number really doesn't matter, until the number dips down to 2 kU/L, for example, so it looks like this will be an issue for a while.  So, we just continue doing what we've been doing, but now I feel like I have specific, molecular confirmation of my daughter's peanut allergy. Now, I don't have to wonder "is she or isn't she?"

I asked her how my daughter could have developed the peanut allergy and asked if the peanut could have gone through breast milk and she said everything passes through breast milk.  I was trying so hard to remember if I was still eating PB&Js when I was nursing and then my husband reminded me that my favorite food to eat for quite a while was Thai food! :O  Um, eggs and peanuts! Oh, dear. :(  We were eating that every Saturday for a while, and we even took our daughter with us in her car seat carrier to the restaurant when she was like 9 months old, I think.  She had already developed her food allergies by the time I started taking her with us to restaurants, but I know I was eating that Thai food when I was nursing (I stopped nursing at 4.5 months), so that must be how she got the peanut exposure (through my milk).  Mommy guilt!  I know, it would have happened some other time, some other way, and I guess it doesn't matter how it happened, but I just get very curious about how these things come to be...

For those who want to know, the test currently costs $300, but was "on sale" for $150, and I was told that I can submit my statement to my insurance company and I might be able to get half of that back, so my final cost might be $75. *fingers crossed*

My one critique of the test is that I think it plays up the "you might find out you don't have a peanut allergy, at all" angle a little too much.  I don't like getting people's hopes up so much on something so emotionally sensitive.  Even me, with a daughter with a sky high whole peanut value, who had no business with any hopes of anything other than the report I received was having little daydreams after reading the brochure and was continually mentally smacking herself saying, "HEY! They aren't talking to YOU!" I still think I am in the target market for the test, though, because my daughter has never had a reaction to peanuts.  They need to make a different brochure for me.  ;)

Edited to add: Here is a link to the Peanut Component Panel Interpretive Guide. These components are now available directly through the Phadia ImmunoCAP catalog, and do not need to be paid for out of pocket, as a separate test.