[I have written a follow-up to my follow-up: Part 3]

In Part One, I discussed some of the things I agreed and disagreed with, in an article about the proliferation of allergy testing.  To further explain why I have more faith than some in blood tests for allergies, I would like to share some information from Food Allergies For Dummies, by respected pediatric allergist and professor, Dr. Robert Wood.  I will also share our experiences with my daughter's test results.

Before I continue, I want to state that I understand that blood test results are not conclusive, all by themselves, and that a medical professional, preferably an allergist, needs to review the patient's history and other information, when interpreting results and making diagnoses.  What I'm trying to convey, though, is that there are instances where blood test results can be highly predictive and useful.

Here are some excerpts from the sample chapter on Dr. Wood's Food Allergies for Dummies site:


Please note that...greater than a NINETY-FIVE percent chance.  I'd say that's a lot better than 50/50 predictability!

So, let's take a look at my daughter's blood test results:  (As far as I know, these are all ImmunoCAP allergen-specific IgE tests performed by Quest Diagnostics.)

This is the key/legend for the lab results.  I added an "upper limit" of 1000, since the test results just indicate "100+", so I could use formulas on my Excel spreadsheet.  Yes, I keep an Excel spreadsheet of my daughter's allergies! ;) 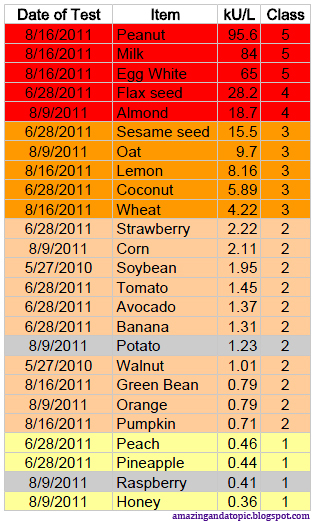 Yes, I know, that's a lot of test results!  Back to the thresholds that Dr. Wood noted...Eggs (7), Milk (15), Peanuts (14) and Codfish (20).  My daughter tested "<0.35" ("negative") for Codfish, but as you can see, her result for Egg was 65, Peanut was 95.6 and Milk was 84.  That is, indeed, well beyond the thresholds of 7, 15 and 14!  So, even though we initially only suspected cow's milk, with a 95% chance that she has a true, and severe, peanut allergy, would you take the risk with your child?  As far as I know, my daughter has never ingested a peanut in her life.  Her exposure must have been in the womb, or through nursing, but I have never seen her eat/react to a peanut.  I have seen what traces of milk can do to her, so I have a history of reactions to go with the milk results, but I just have to act "as if" she has a severe peanut allergy.  The risk is too great and the odds are too "good" that she is severely allergic.  I believe I have also seen proof of her egg allergy from the flu shot incidents.

I think she was just lucky that I was wary of peanuts from the first sight of her eczema and never even considered giving her peanut butter, but I do wonder what might have happened if I had never tested for peanuts (since it wasn't a prime suspect).  That could have been very bad.  I do know, though, that the test result number does not indicate what the severity of a reaction will be, but there is a tendency for the allergic-reaction's severity to be more severe, as the values rise.

I made my daughter a cupcake, once, using flax seed as an egg-substitute.  She got itchy and threw up, and I avoided flax seed until we had the additional blood tests done.  (Update: Apparently, when I wrote this, I had forgotten about this incident, and must have decided to try flax, again, which was obviously a horrible mistake.  By the time I wrote this post, I was assured of her flax allergy, but at that time, I clearly was not.)   Sure enough, it came back as a Class 4.  Even though Classes 4-6 are all "Very High", I know that doesn't mean that every reaction to those foods will be the same.  What I can be relatively certain of, though, is that she is allergic to it.

Unfortunately, they haven't determined thresholds for all the other food items, so for some of them, it has been trial and error.  Before I had the blood tests done, I was feeding her corn and potato.  When I got the test results back, I removed them both from her diet and added them back one at a time (with the allergist's OK) and we found that only the corn was aggravating her eczema.  She does seem to be OK with cornstarch or corn syrup ingredients, but corn tortillas are "off the table", now. [Update: Corn tortillas, canned corn and corn on the cob have since been added back to her diet.  I am still confused about marshmallows.  They seem to make her itchy.]  None of the foods below 10 kU/L appear to be anaphylaxis risks, for my daughter.  They haven't decided on a threshold for wheat and so I avoid it, completely. [Update: I have since learned that there is "20" threshold for wheat, but I am still avoiding it, because it can aggravate asthma and I'm not sure adding wheat to her diet will be beneficial.]  There are some foods on the list that she has never eaten, yet we are avoiding due to the test results.  Those foods are: peanut, almond, sesame seed, coconut, walnut, orange and pineapple.  I think it is perfectly reasonable and not detrimental to her health to avoid those food based solely on the blood tests results.  Well, the pineapple result does not worry me much, but I know a lot of people who find the juice irritating to their face, so I just haven't tried giving it to her.  The other foods, from what I have seen, aggravate her eczema, so we avoid them.

Now, the thing the allergist told me, while explaining the concept of false positives was, "Has she eaten food X?  Did she have a reaction? If not, she is not allergic to it, even if the blood test has a positive value."  My daughter's allergist's philosophy is to avoid all allergens, to which she has reacted, as long as possible.  He is fine with her eating foods that tested positive, but to which she does not react, though.  The two foods in gray (potato and raspberry) appear to be false-positives, so we let her have those, but sometimes I wonder if I'm just missing the connection between those foods and some of her rashes or allergic rhinitis.  For the others, we are just avoiding them entirely.

It's a continuous learning process and as she grows and her immune system develops and changes, so will her allergies.  I plan to redo the blood tests when she is 4 years old.  Her allergist said that will give her immune system more time to develop and hopefully she will drop some of these allergens from her list. *fingers crossed*

So, the point of all this is that blood tests can be very helpful in diagnosing and, subsequently, managing your child's allergies.  I agree that they are not as useful in a vacuum, but I am very glad that these tests exist and hopefully their diagnostic capabilities will improve in the future.