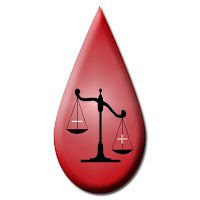 It has been a long time since I wrote the post, "In Defense of Food Allergy (IgE) Blood Tests - Part Two", and since that time, I feel I have learned a little more and changed my tune, a little bit, about blood testing for food allergies.

I still believe that blood testing for food allergies can be very predictive, for foods above certain "positive predictive values" (scroll to the bottom of that page for those values) and I believe that having my daughter tested for a peanut allergy, as part of the standard childhood panel (which tests for the Top 8 food allergens and a few environmental allergens, typically), when we only suspected a milk allergy, saved her from experiencing what might have been a severe anaphylactic reaction.  We did not expect her to test positive for peanuts, but we are certainly glad we found out via the blood test and not a real-life serious reaction.

If you have a family history of seasonal allergies, asthma, eczema or any other allergic conditions, and your child starts to show any signs of issues, like eczema of their own, frequent ear infections, etc., then I still believe blood testing is warranted.  Birds of an atopic feather, tend to flock together, unfortunately.  (Also, even if you don't get blood testing done right away, as I mentioned in my Maternal Diet and Food Allergies post, there is a helpful article on how to introduce solids to babies at risk for food allergies.)

However, I now no longer believe that I should have tested for any food for which there was not a suspected reaction (beyond the standard panel).  Take a look at this list of foods, for which my daughter has been tested, along with the most recent IgE values: 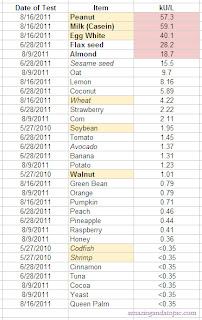 The foods highlighted in yellow are the ones that were on her very first panel at 18 months of age.  They constitute the "Top 8" foods.  She tested "positive" to all except for the codfish and shrimp.  After all the confusion about taking it in and out of her diet, she eats soy yogurt just fine, now.  As for wheat, even though we declared the wheat trial a no-go, wheat is not an anaphylaxis risk on the level of her milk and peanut allergies.  She is sensitized to it, and we avoid it in her diet as strictly as we do her other allergens, as far as ingestion goes, but she plays with Play-Doh and holds regular bread to feed ducks at the park, etc.  The foods highlighted in dark pink are anaphylaxis risks.  (Well, she has never eaten an almond, but it is too high risk to find out the hard way, so we avoid all tree nuts.  She has also never eaten a peanut, but her whole peanut IgE levels have always been very high.  We have also had the uKnow component testing done for her peanut allergy and she is highly sensitized to Ara 2 h, which is linked to severe systemic (anaphylactic) reactions.)

However, from there down in the list, that is where my opinion on blood testing for allergies has changed a bit.  I used to think that blood testing had a place in the arena of trying to pinpoint the cause of eczema flares.  I don't mean to say that it has no place, because obviously, it's my daughter's eczema rash that started this whole journey in the first place.  If your child has a persistent rash and you feel food allergies might be the cause, by all means, I still believe food allergy testing is warranted.  However, if no obvious results emerge, like my daughter's milk or peanut results, for example, I'm afraid the plain, tedious truth of the matter is that you're headed for an elimination diet.

Look at all those foods I tested, trying to hunt for the culprit to my daughter's eczema triggers.  Now, I will say that I tested a few for valid reasons.  I tested almond, because it's another "tree nut" and the walnut value was very low and I wanted another "tree nut" value to support my case for avoiding tree nuts, along with peanuts.  Some people do not avoid tree nuts when their child is only allergic to peanuts, since peanuts are legumes, but I feel there is too big a risk for cross-contamination and when nuts are chopped, you cannot tell them apart, etc., so I wanted further information on my daughter's nut allergies.  Seeing that value for almonds was confirmation enough for me to fully avoid nuts of all kinds.

The testing of flax seed was also a valid use of the blood test, since she had a reaction to it and the blood test confirmed that she is, indeed, severely allergic.  As for sesame, the jury's still out on that one.  That value of 15.5 gives me great pause, but she has never eaten sesame, before, that I know of, and having that value makes me nervous about trying it.  Sesame is believed to be cross-reactive with peanuts, but there is no guarantee that she will be allergic to that, as well, so the blood test was not completely unwarranted.

So, I guess I just wanted to add a word of caution for those receiving food allergy testing results, to be very careful not to restrict their child's diet too much, based on the results, alone.  It's a delicate balance.  You want to make sure and strictly adhere to the zero-tolerance policy for your child's true anaphylaxis risks, and check every label, every time, avoid foods that have "may contain" labels (if it's a food for which they even label!), etc., and always carry your epinephrine auto-injectors (yes, carry at least 2, at all times!), but if you've already been through initial testing, and eliminated those and there's another food that you only suspect is an eczema trigger, I wouldn't recommend doing a blood test for it.  In my experience, your best bet would be to do an elimination diet for it.

As the linked article states, you do NOT want to do elimination diets for any suspected anaphylaxis risks, but if this food has not caused any hives, itchy mouth/throat, difficulty breathing, stomach problems, or other signs of anaphylaxis, but is only suspected of aggravating eczema, it would be a good candidate for an elimination diet and not a good candidate for a blood test.  (If the food is causing any signs that point to anaphylaxis, you will NOT want to do an elimination diet, NOR would I suggest a skin prick test and I would be back to recommending the blood test!)