Most babies will come home from the hospital wearing those tiny little mittens on their hands, and they'll wear them for a month or so and that's it.  If your little one has eczema, though, you might find yourself buying them quite a bit longer.  My little sweetheart is going to be 3 years old this week and we still have to keep her hands covered most nights.  Even though her eczema is relatively under control, I still catch her scratching in her sleep.  Even though she's old enough to stop herself from scratching in the daylight hours, when she's asleep, there's no way for her to know what she's doing.

We started out with baby mittens when she was an infant, and then we used the "onesies" with the fold-over sleeves that turn into mittens.  Those usually only go up to size 12-months, so after that, I started buying 18-month and 24-month onesies, online, and I sewed the ends of the sleeves closed.  I felt a little bad making these "baby straight-jackets", but it was better for her, of course, than letting her scratch in her sleep.  I had looked online for professionally-made eczema wear, but the only ones I found were from the U.K. and prohibitively expensive.  They were made of eczema-friendly materials and looked awesome, but I just couldn't see paying upwards of $70-$80 for a single garment.  So, every once in a while, I would order a multi-pack of long-sleeved onesies and make my own.  I would go with the next size up from what she normally wore, so that I could put it on over her pajamas.  At first, I used the snaps to make sure she didn't try to take it off at night, but she got used to them pretty quick and I don't think she ever tried to take them off.  There was a time, when I bought some soft, cotton socks and tried to put those on her, but she would take those off at her earliest opportunity, or when she fell asleep, she would pull at them and eventually take them off.

As she got taller, the onesies wouldn't snap, so I ended up just leaving them open at the bottom.  Then, one day I was at the store and they had long-sleeved cardigans on clearance for $2.50 a piece, so I bought a few of those.  She had been getting a little tired of wearing the onesies at bedtime, so this discovery came just in time.  She was excited, because these "onesies" had buttons and seemed like a big-girl top.  (She still likes to call them "onesies".)  Anyway, I sewed up the ends of those and we're still managing to keep her in them, which is great.  As I said, she'll be 3, very soon, so we'll see how long we can get away with this, but I just thought I'd share our solution for her nighttime scratching.  Do you do this, too? 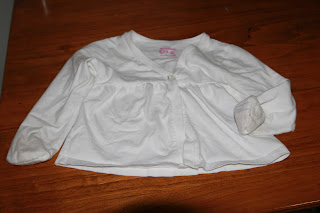