Take the Fear out of Epinephrine

I have re-written this post 6 times now, but each one was two miles long and I don't want my main message to get lost in the fine details of the events of the night.  So, I'm going to try and keep this really brief.  When you see how long this post is, just imagine how long the "long post" must have been!  If anyone wants more details about any part of the story, feel free to ask.

Whenever I tell one of these tales to my friends, and luckily I haven't had to tell too many of them, I like to show a picture of my daughter, from not too long after, to show that she is OK, now: 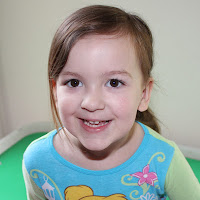 Now that I have complete omniscience about what was happening that night, hopefully I can tell the "short version" of the tale, but keep in mind that I did not have the luxury of a crystal ball, as all of this was unfolding.

Apparently, my daughter picked up a viral illness, that starts off with a facial rash, then several hours later produces a high fever and vomiting.  Unfortunately, I did not get the memo that this illness was on its way and chose this same Sunday as the day to let my daughter try a new candy.  (Halloween is coming up and she will be turning 4 in November, so I figured it was time.)  She developed the facial rash, shortly thereafter, and that put me on alert, but we had given her Allegra and decided to watch and wait.  For the past several months, I have been sleeping with her in her Queen-size bed (it's a long story, don't judge - ha!) and at 2:00 a.m. I could hear her breathing with a slight gurgle-sound and I put my head on her back and noticed she was burning up.

I got my husband and we woke her up and she immediately complained that her throat and cheek hurt, and said she wanted (hemp) milk and then said she wanted to go to the bathroom.  All of this was causing me concern.  Even though this was several hours after the candy, she has had delayed reactions to foods, before.  The fever was not on the "usual" anaphylaxis symptoms list, but everything else was setting off bells.  I had "new candy" on my brain.  I knew an illness was a possibility, but was unaware of the virus going around town and I could not be sure of what was happening to her.  I told my husband that if any new symptoms came up, I would have no choice and that we couldn't take a chance.  Just then, our daughter was shaking, saying she was cold, and she leaned over the toilet and threw up a little.  I cleaned her little face, then I grabbed the EpiPen, pulled off the safety cap, told her that I was sorry, but I needed to give her "this" medicine (she knows what it is and how it works, we have used the trainer many times) and my husband was squatting behind her, hugging her.  I pushed it into her leg, until it clicked.  She said, "Oww!" and I counted to 10.  She stayed still, thank goodness, and then I rubbed the spot for a few seconds. (Important note:  When someone is administered epinephrine, they should lie down, with their feet slightly elevated.  I had my husband pick her up and take her to the couch, to lay her down, but I should have had her lie down, right where she was already located.  "Sitting or standing up suddenly after receiving epinephrine can lead to “empty vena cava” or “empty ventricle” syndrome and sudden death."  This important information is also covered in the Anaphylaxis First Aid Training Course provided by EpiCenter Medical.)

She didn't seem fazed, but later described to me how the medicine went all down her leg and up to her head and it made her heart go really fast, "like [my] sewing machine on the fast speed".  (I have a Brother SE-400 with the button you can push to make it sew really fast!)  She also said it was beating both slow, then fast, like on the "broidery" setting, so I guess her heartbeat was changing speeds at times.  I asked her if the shot hurt like the ones she gets at the doctor and she said the ones at the doctor's office hurt more and that confirms what I have read, about the needle being smaller than those used for vaccines.  She said the needle didn't hurt, going into her leg.  She described it going in as "smooth", which I thought was interesting.  It turns out that it was actually the amount of pressure I put on the EpiPen housing and not the needle, itself, that made her say "Ow".

After administering the epinephrine, I called 911, as we're supposed to, and they came to check her out.  They told us about the virus going around, and I also later found out about two other little girls who had the exact same symptoms, who don't have my daughter's food allergy history.  The EMS team was very nice and said there was no charge for their visit and since we "refused transport" we didn't have a charge for that, either.  They said we could call any time, though we certainly hope we don't need their services, again, but it's good to know, nonetheless.  (Edited to add: I wanted to add a note about the fact that we "refused transport".  EMS said they were perfectly fine with that, as I told them I was concerned that she would pick up more germs in the ER, given all that was going around, and they agreed and said she would be fine.  The mandatory observation period is typically to monitor for biphasic anaphylactic reactions, but she did not have an anaphylactic reaction, so there was nothing to monitor for, and the EMS personnel said to just follow up with her pediatrician the next day.  I just didn't want anyone to be concerned that we "refused transport" against EMS' recommendation, or something.)

It was a stressful night, but once it was all done, all of that built up anxiety and fear over administering the epinephrine was gone.  I am no longer afraid of it.  After seeing my daughter talk about it like it was not that big of a deal, I'm hoping she is not afraid of it, either.  I have talked to her a few times about it, since, and she does not seem bothered by it, at all.  That is the main point I want to get across.  What used to be "A-pin-I-fear-in" is now my "Epineph-Friend".  (If you aren't familiar with Kyle Dine's music for children, you really need to go to his website!  He has a song called, "My Epineph-Friend" from the album "Food Allergies Rock!"

There really is no reason to be afraid of using this medicine.  That is how we need to see it.  It's just another medicine.  I know this might sound a little bad, but it was a really easy process for me.  All I felt was a little click, and the needle is always completely out of sight.  There is a long, plastic cover that comes out over the needle and I never saw it.  It seemed just as "fake" as using the trainer, aside from my little Sweetie's "Oww!" , which gave me a little pain in my stomach.  It didn't give me the sense that I had just injected my child with a long needle, though.  I say this to hopefully put others' minds at ease, if you're worried about how it might feel to administer the medicine.  If you have used the trainer, it is pretty much just like that.

Another point I want to make is that we shouldn't be discouraged from making the call to administer epinephrine, even if it looks "iffy" and might be a viral illness.  (Plus, check out my other post on anaphylaxis posing as asthma, as well.)  As I said before, we do not have a crystal ball and have no way of knowing the future.  We could have a set of symptoms that turns out to be anaphylaxis where epinephrine was needed and the same symptoms may end up being a viral illness where epinephrine was unnecessary, as was the case with my daughter.  Which would we prefer, to have not needed it and administered it, or to have needed it and not have administered it?  The tricky thing is we have no way of knowing ahead of time, which scenario we're experiencing and by a certain point in one scenario, it would be too late.

I know that first-hand experience is always more powerful, but I'm hoping those of you reading will take my words to heart and believe me when I say that it's really nothing to fear.  We need everyone to carry their epinephrine at all times, and most importantly, use it!

Look back at my smiling Sweetie at the top.  If she can handle it, you can, too!

I've written a follow-up post, which you can see here.