My daughter's birthday is coming up, next month, and I have been trying to find THE cupcake recipe for her party.  I've been fine with the ones I've made in the past, but they do end up a bit dense as time passes and the next day, after being in the fridge, they are definitely thick and chewy, etc.

I had ordered some Authentic Foods Gluten Free Flour Mix a long, long time ago, back when I bought Cybele Pascal's book, The Allergen Free Baker's Handbook, and I had made some sugar cookies with it and they came out good, but it was back when I first started baking allergen-friendly treats, so that was about all I made with it.  The flour seemed a little pricey to me and the shipping cost was almost as much as an extra bag of flour, so I didn't order more for a long time.

I got busy, kept on buying King Arthur Mill's flour at the store, but I decided to place another order from Authentic Foods and try some cupcakes, using Cybele Pascal's Easter Cupcake Recipe.  I also ordered some of Authentic Food's Vanilla Powder, which you can use in the place of vanilla extract.

The new flour came in the mail, and I made a batch of cupcakes for my daughter to take to a friend's birthday party.  When the cupcakes were baking, she came into the kitchen and said, "I smell something yummy!"  When I took them out of the oven, they looked promising...When they cooled a bit and I opened one up to check the texture, I wanted to weep tears of joy!  They were SO FLUFFY!!  (Cue the image of the little girl from "Despicable Me"...)  We tasted a piece and it was SOOOO GOOD!  This was hands-down, THE BEST gluten-free/wheat-free, egg-free, milk-free, nut-free, probably-pretty-close-to-corn-free cupcake I had ever made!  Now, I am not the world's best baker, so I know this might not be saying much, but it was really good.  My daughter was really excited and told me, "Mommy, I want you to buy this flour EVERY TIME!" 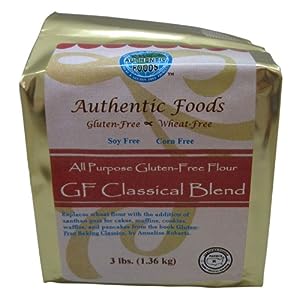 I had doubts about what kind of difference a flour mix could make, since I had individually mixed flours, before, but this flour is just amazing.  It comes in a gold bag for a reason - because it's worth its weight in gold!  OK, I'm gushing, I know, but I think those of you who bake gluten-free, frequently, might understand the trials and tribulations one goes through in trying to find THE flour and THE recipe that actually tastes good enough that you don't feel bad subjecting all of your child's friends to it, at their birthday party. ;)

For Cybele's recipe, I did make the following substitutions:
The next day, I used the AF mix to make the Cake Pops/Cake Balls recipe and that came out even MORE delicious than the cupcakes and I was over the moon!  Have a look at this fluffy deliciousness: 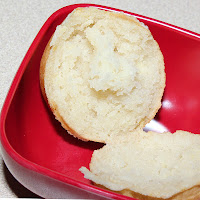 I didn't even frost them, or anything...we were just eating them straight out of the machine (after they cooled enough, of course) and they were yummy!  The next day, my daughter did say, "They're different, but still good!" and I know that GF baked goods are just not as good once they have been refrigerated, but these were still so much tastier than the other things I have made in the past, that ended up a bit dense and chewy, after refrigeration.

Oh, and it gets even better...I went to Google to search for more flour, since I knew I would need more for my daughter's birthday and I saw that it is now available through Amazon and even via Amazon Prime!

Do you all already use this wonderful stuff?  Am I the last one to the delicious party?  What do you all think of it?  Send me some recipes! :)

P.S.  If you are ordering directly from Authentic Foods' website, the gentleman I spoke to from Customer Service said to enter "Priority Rate Flat Box" in the shipping instructions, at Checkout, and that might save a bit on the shipping cost.  They don't charge your credit card until they ship your order, so it might be less than what you see when you check out.  Amazon does not carry their entire product line, so if you want additional items, like their Vanilla Powder, you will have to go straight to their site.

P.P.S. I also wanted that I love how well it works, for being so simple.  My daughter has so many restrictions and I like to stick to tried-and-true ingredients and all this has is superfine brown rice flour, potato starch and tapioca flour.  So simple, yet so good.