I wanted to get right down to business and cover the Auvi-Q™, itself, with my previous post, but now I'd like to take a moment and cover more about the rest of the summit. :)

An equally exciting part of getting to attend the Auvi-Q™ Social Media Summit was having the opportunity to meet these awesome food allergy advocates, writers and bloggers, in person!

I was very impressed with the warmth and friendliness of everyone involved.  Though not pictured above, I dealt quite a bit with Kristen from Marina Maher Communications.  She made the hotel and travel arrangements for the trip and was very helpful throughout the process.  I really appreciate pleasant, positive people and everyone I interacted with, both via Marina Maher and Sanofi US, were so vibrant, energetic and enthusiastic.

One of the first things I noticed about the food were the little ingredients cards, in front of the baked goods provided from Sensitive Sweets.  Ah, if only the whole world's foods were presented that way. :) 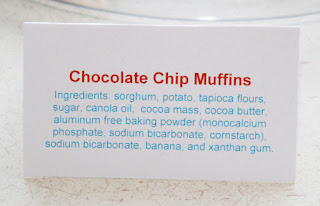 Earlier in the summit, there was a brief, yet information-packed, presentation by Dr. John Oppenheimer, who is the Director of Clinical Research at Pulmonary and Allergy Associates, as as a Clinical Associate Professor of Medicine at the New Jersey Medical School.  He had me reaching back to my high school biology class files in my brain (which did not come back to me until later), discussing hymenoptera anaphylaxis, which was suspected to have killed Menes, the first king of Egypt.

I found myself nodding repeatedly, as he presented statistics on the under-utilization of epinephrine in ER situations, of which I think many of us are painfully aware.  Even though I now know that using epinephrine early is very important, I didn't realize that it can actually help prevent biphasic reactions.  He said he often counsels care providers to "use early and use often", which I think is excellent advice.

Dr. Oppenheimer also covered the "Hygiene Hypothesis" in a way that finally made it "click" for me.  I had always been a bit irritated with the theory, thinking to myself that I had plenty of "dust and dirt" around the house, and it didn't do my daughter any good. ;)  I know it's not as simplistic as that, but basically he explained the tale of two populations, one that was given the MMR (measles, mumps and rubella) vaccine and one that was not.  The group that was vaccinated against MMR had a lower incidence of the 3 infectious diseases, but higher rates of food allergies.  The population that went without the MMR vaccine had higher rates of the infectious diseases, but presented with lower rates of food allergies.  So, basically, if the body was busy fighting off real infectious diseases, it was too busy to pay attention to "normal" foods and see them as invaders.  I don't think this is the sole reason for the food allergy epidemic, of course, but at least the theory makes a bit more sense to me, now.

After that, we had the Auvi-Q demo, which I discussed in the previous post.  We also had more discussions on various food allergy and anaphylaxis topics.

Later on, lunch was catered by "Mama's & Cafe Baci", which had gluten-free menu items.  Before our arrival, Sanofi asked us if we had any food allergies or dietary restrictions.  During that allergy-friendly lunch, I got to chat a little more with the other attendees, and it was so wonderful, just to be around such creative souls, and people I have admired and learned from and sit in an atmosphere of people who share a common cause, yet still have their own unique opinions on the various topics concerning the food allergy and anaphylaxis community.

The entire event only lasted for 4 hours, but I felt like we could have continued talking for 24 hours straight, if given the chance!