No matter how much I learn, I still make mistakes, sometimes.  (As always, I tell you ahead of time, she's totally fine and this was not a big reaction.)

A couple of weeks ago, I was making a "pizza crust" for my daughter and I ran out of my Authentic Foods GF flour, so I went into the pantry and got a box of King Arthur Flour (KAF) GF Multi-Purpose Flour to use.  I made the crust, cut it into some cute shapes (she had grown tired of the standard "round" crust) and she had her dinner.  Later that evening, she had lots of spots all over her legs.  I gave her some Allegra, and luckily nothing more came of it.  I thought to myself, "what in the world caused this?"   I could not think of anything that she had eaten out of the ordinary.  It had been a long time since she had King Arthur Flour, but she had eaten it many times before, without any apparent issue.  I keep a running diary on Google Docs (now Google Drive) and I consulted it and didn't see anything that stood out.  The only thing "different", though, was the KAF, so I didn't give it to her the next day, and the rash cleared, so I went to look at the box, again, and noticed something odd about the box.  I noticed that it didn't have the "*Free of the Top 8 allergens" note that it usually has on it.  Eep!  I got a little panicky and wondered what was going on...I grabbed my box of KAF GF Bread Mix and it had the "Top 8 Free" notice on it, so I knew it wasn't something that I imagined.  I scurried to the website to see what the deal was and I saw that the labeling had changed and it used to read "Wheat Free / Nut Free / Soy Free" on the front and now it only reads, "Wheat Free". I also realized that *GASP* I had never written to them to ask them if there was a risk of cross-contamination with flax seed!
:O 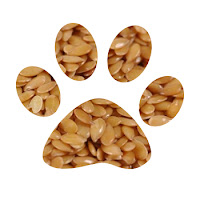 I guess it was because I started using KAF well before flax was prominent on my radar and did not remember to re-check it after we figured out it was an allergen.  Either way, it was a mega-oversight on my part.  So, I wrote to them and sure enough, they advised against using the Gluten-Free Multi-Purpose Flour if my daughter has a flax seed allergy. :/  They did assure me that their flour is still made in a facility that does not have the Top 8 allergens, but it is not independently certified, so they no longer label it as such.  They also stated that nothing has changed about their manufacturing process, other than the labeling.

Sigh...My poor angel...How many unexplained rashes might have actually been caused by that flour? :(  As with any cross-contamination risk, it's the luck of of the draw as to how often the "flax leaves tracks", so I guess there were just several times that we "got away with it" and this most recent time there was a higher level of contamination.  We were just very lucky that it wasn't higher than that!

So, my apologies for all the recipes in which I mentioned the use of King Arthur Flour, thus insinuating that it is flax-safe, given that my daughter has a flax seed allergy.  I will amend those recipes post haste, with a note, until I can try them out with different flour to see how they work out.

What are the lessons, here?