Well, I took my daughter to the allergist for her follow-up appointment and we got our orders for some more blood tests.  Even though I felt I learned the lesson I described in "Part 3" of my series of posts on food allergy blood testing, I just could not help myself from testing a few foods, before having my daughter try them.  I also re-tested some known allergens, so I could keep track of trends, over time.

Now, I know better than to get my hopes up too high and I am the first one to explain to people that the slight fluctuations of blood tests results really don't mean much, but I must say I was a bit pleased to see the drop in my daughter's values for peanut and milk.  I understand that these numbers are still high and that we can't even think of considering an allergist-supervised challenge, until they drop under 2 kU/L, or preferably <0.35, but let me just daydream here a bit and enjoy the downward trajectory of these numbers...

Another thing to note, is that you cannot usually compare values between different test types, performed by different labs, so I must state that the first 2 values for the peanut chart were done by Quest Diagnostics, the 3rd was done directly by Phadia, as part of the uKnow Molecular Allergy testing and the 4th was done by CPL Labs.  However, they are all Phadia ImmunoCAP tests.  The rise in numbers for both peanut and milk might have been because she had experienced anaphylaxis in between those two test points, and I've heard that can happen.  I'm just particularly struck by the big difference between her highest value and her most recent value.  Even if they were different labs, calibration differences would not be that far off, between two labs, performing the same kind of test, would they?  (I would welcome any input...) 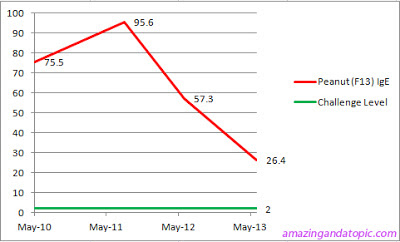 For the milk values, again, I am struck by the drop, but still not in any way believing that this means anything, at this point.  Her numbers still have a long way to fall.  I guess I'm just looking for something to be positive about, but really, I know that even if the numbers went up, as they did at the second blood draw, that doesn't tell the whole story. 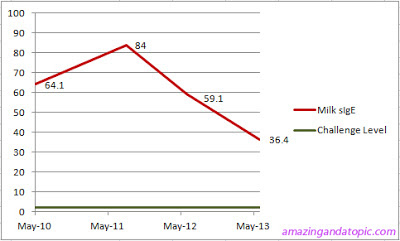 It's certainly a long waiting game...We're either waiting for tolerance to develop or a cure.  To quote some songs that come to mind: (comma added to the first song)

"You can't hurry, love
No, you just have to wait
You got to trust, give it time
No matter how long it takes"


I'm going to cover the rest of the test results in a separate post, to keep my posts to a manageable size.  Thank you for reading and if you have any input/insights/comments, I'd love to read them, as always!