I will confess right up front that I have not been a fan of Halloween/trick-or-treating for quite some time, now. I guess it safe to say it started when I found out that most Halloween candy is filled with things that my daughter cannot safely consume. I spent a lot of time grumpy and fussy around Halloween and didn't even realize it. Halloween would come around and I would tell my husband to shut off the lights and all signs of life and we would hide out in the house and play games with our daughter and duck the trick-or-treaters. I haven't kept my daughter from celebrating, though. Ever since my daughter was born, she has attended a Halloween party with her playgroup. We have always had a great time with her friends, but we've just been skipping the trick-or-treating aspect.

When I saw the post from FARE on the Teal Pumpkin Project, I suddenly felt like we had a chance at making this trick-or-treating thing work. The project involves offering non-food prizes, so that those with food allergies and other dietary restrictions can participate. During our annual visit to the pumpkin patch, I eyeballed the pumpkins to see which ones had a nice, smooth, paintable surface and we got a few different sizes. I took my daughter to the craft store and we bought some wooden pumpkin masks to paint and use as mini-yard-signs. We couldn't find teal paint, so we went with Bahama Blue acrylic paint. It's a bit too light, but it's the thought that counts, right? We also bought a fall harvest basket to paint and small wooden pumpkins on a stick for additional yard décor. We then stopped at the party supply store and picked up small "party favor"-style toys.

A few days later, I got an email from the producer of the News 4 San Antonio evening news, asking me, or my support group leader, if we'd like to do a live segment discussing the Teal Pumpkin Project. Our group leader is a bit on the camera-shy side and she had asked me to do our TV segments, in the past, so I knew I should step forward right away. I didn't have many days to prepare, but I did my usual routine of practicing my "talking points" out loud, while running errands in the car, etc. Three minutes may be a lot of "airtime", but it goes by in the blink of an eye and I knew that I had to try and cram as much information as possible into the short span of time. When I arrived, I was not only excited to see that multi-Emmy-winning Randy Beamer would be doing the interview, but I was also excited to see that he was wearing a teal tie! What a thoughtful gesture! 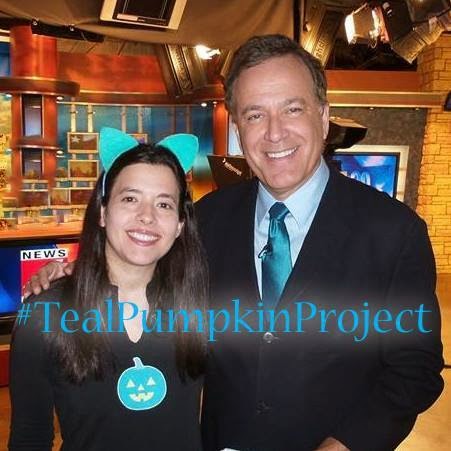 
I think I managed to get most of my points across - phew! I wanted to give credit to Becky Basalone of FACET for starting the project and to FARE for promoting it on a national level. I wanted to make the express point that the project's goals did not include a plan to remove candy, but instead sought to encourage others to add non-food items to their offerings, if they wished to participate. (We, personally, only had non-food items, due to my daughter's multiple food allergies, but we didn't want people thinking we were trying to ban candy from the holiday.) We asked that toys and non-food items be kept separately to avoid cross-contact. I was able to deliver some brief information on food allergies, in general, and I worked in the point that they are a serious issue, even though we're trying to have a bit of safe fun. I know that I said that there is "no known cure" and that was because I was on autopilot, but I believe we do have cures in the pipeline. One of the things I didn't get to add was that I prefer to avoid toys that go in the mouth, as that can be a way to inadvertently pass allergens from one child's mouth to another.

For Halloween evening, we set up a table in our driveway and our main giveaway was glow sticks

. (#afflink) They were a HUGE hit and just about everyone was excited. There was only 1 girl, I'd say about 7 years old, who inspected our table, saw there was no candy, and looked at me with a confused look on her face. I asked if she wanted a glow stick and she said, "no" and stared at me. I didn't mind a bit, as many children can become confused when things vary from expectations. She went on down the street and later came back through and asked for a glow stick. I also had small toys for the 3-7 age group and the kids liked them, but many liked them a bit "too" much and were grabbing in the bucket, trying to take more than 1 and their parents were getting on their cases about it. One girl walked up and took about 10 glow sticks, which really didn't bother me, but her parents made her give most of them back (honestly, once she touched them with her "lollipopped" hand, I didn't want them back!)...I didn't have a lot of time to explain the project, so I think some people thought we might have been promoting safety or something, since we had so many glow sticks. In any case, we had a steady stream of happy trick-or-treaters. I don't know of anyone that came by that actually "needed" the food-free goodies, but that didn't really matter to me. I felt so much better participating, this year, know that I was not contributing to their ill health. Now, I have to grapple with the environmental effects of used-up glow sticks, of course, but hey, trade-offs! ;) A neighbor/friend of ours decided to do the TPP and she was the only one in the neighborhood and completely saved the holiday for us. Her friend down the street also benefitted, as her son has diabetes. So, I guess, technically I had one "qualifying customer" and that's good enough for me! :)

My daughter LOVED helping me manage the giveaway table and seeing all the costumes. She thought it was the greatest thing, ever. She kept saying all kinds of things about how she was so excited and how great it was that so many people were coming by to get glow sticks, etc. We had purchased 3 tubes of 100 glow sticks and I'd say we went through about 250 of them in a couple of hours. (Note: Tell the littlest ones not to put glow sticks in their mouth! I had one tiny tot immediately go to put the glow stick in their mouth, thinking it was candy. After that, I waved them fancifully and said, "liiiiight, not candy...")

After we were done, we closed up the table and took my daughter to our neighbor's house and she trick-or-treated at that one house. As we left our house, she said, "I can't believe it!! I'm going to trick-or-treat for the first time in my whole life!!" *tear* (She is almost 6!)

We got to her friends house and they had a teal pumpkin (that I painted and gave to them ;) ) and my friend had made individually-wrapped goodie bags. (Note: I think if you're doing something special like a "goody bag" you can definitely have those "by request only," especially if you're also handing out candy.) My daughter walked up and said "trick-or-treat," got her goodie bag and then played with her friend in their front yard. Though we only went to one house, it was definitely a special moment for my daughter and she was overjoyed and completely satisfied. She didn't ask me to go to any other houses. I had explained to her that this was the first year for the project and that it takes time for people to find out about it, etc., so I had managed her expectations ahead of time. That usually helps her out. My main point is how much happiness one family can bring to one other family, with such a gesture. One caring heart is all it takes. For those considering participating next year, you could be the one person to light up a child's face!

In thinking back on the night, here are some of my "notes to self":


I think, overall, the event was a success for us, as I gauge the success by my daughter's reactions, which were effusively positive. This project offers everyone the chance to put their own unique spin on it and there are no hard and fast rules, aside from those that keep everyone's children safe! :)

THANKS, AGAIN, TO BECKY & FACET FOR STARTING THIS NEW TRADITION!


Here are some items you might find useful in planning for next year: (affiliate links)