January will mark 3 years that we have been in treatment with Dr. Xiu-Min Li. We have been so lucky to see the continued downward trending of her IgE levels. My daughter is no longer on daily antihistamines, she rarely gets sick and when she does, the illness is short-lived, and almost her entire body is eczema-free, aside from the tops of her ankles, which are a bit of an unsolved mystery. (Actually, part of the mystery isn't so mysterious - I am not being very compliant about the eczema creams that Dr. Li has prescribed, so that is definitely a factor.) Aside from that area, we have worked hard to stay at around 99% compliance with capsules, baths and after-bath creams. In the past couple of months, I'd say we might have even slipped into 95% compliance territory, because we have skipped a few baths, here and there. Even so, I feel we have been very good in the compliance department. It has not been easy, though. It's a lot to manage, but worth the effort.

We recently had a couple of big "wins" that I'd like to share. If you'll notice, the "currently avoiding" list on my banner is missing one food - flax! My daughter's flaxseed allergy has been one of the more restrictive items on her list. It's often used in a lot of allergy-friendly products, or on shared equipment with said products. Calling companies about flax cross-contact is tiresome and sometimes fruitless, since they don't always have that kind of information readily available.

I've written previously about my daughter's reaction to flaxseed when she was a few weeks shy of turning 2. It started quickly, but was protracted and escalated as the night went on. (I actually wrote about it in a few posts, as it was very traumatizing for me - even more so after the fact, when I realized how bad it was without me being fully aware of the situation.) She was undiagnosed, at the time, but later her IgE test came back at 28. She also experienced intermittent rashes from foods with cross-contact with flaxseed.

This mini-chart shows her flax IgE over time: (below the line is after treatment began...)

Her IgE had already dropped off quite a bit before treatment started, and it continued to drop a little during treatment. I grew confused and frustrated a bit, because I felt like it just didn't make sense. A part of me was terrified of flax, but another part really felt like she was "ready" to tolerate it, to some degree, but her IgE would not go below 2. She had a skin test for it back in May 2015, and the wheal was as big as the histamine control. Dr. Li reminded me that the skin has a longer memory, but the allergist didn't recommend doing a challenge with such a positive skin result. Around that time, her IgE was 2.76.
When we tested in July, it only moved down to 2.20. I had this feeling that it was just "stuck" and wasn't going to go down any further. Dr. Li had previously explained that IgE may never go back to "before they were allergic" or "when they were a newborn" etc., and I thought to myself that maybe this was "as low as it gets" for flax.

Initially, I asked Dr. Li for her opinion on doing a challenge for a "trace" amount of flax. I really didn't care about eating flax straight. I just wanted all those many allergy-friendly products that are in cross-contact with flax. She said we could talk to our allergist about doing a challenge with a small amount of flax. I recently switched allergists and when she looked over my daughter's history, she felt that even with the reaction from when she was 2, she had a good chance of passing a full challenge. We split the difference, and decided to go with what came out to about a 1/2 serving. This was in the form of me using a "flax egg" (3 T. ground flaxseed meal) in a dozen muffins.

It's hard to describe, but I had these simultaneous feelings that she was ready to try flax, again, yet utterly terrified to the point of feeling ill. I felt like part of me knew that everything would be OK, but the other part was so scared. Anxiety isn't a very logical friend.

We arrived at the appointment and the nurse said they were going to do a skin test and I got nervous. The last skin test wasn't so great, but this time it was being done with a muffin that contained flax and not straight flaxseed. Her histamine result was HUGE! Even her saline control had a tiny wheal. On the other arm that was poked with the flax muffin, there was barely a blip. Phew! 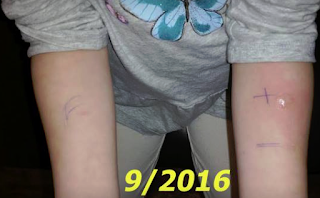 The process took quite a while, with larger and larger pieces being eaten over the course of about 2 1/2 hours. I watched her like a hawk. My insides flip-flopped a thousand times, but she was fine. *I* actually sprouted a small hive on my cheek. Oh, the irony!

She drew a picture of her "Minecraft alter ego" looking at a muffin, saying, "Yum!" They declared it a success! 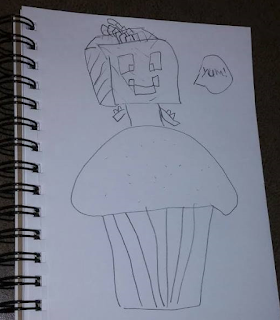 We planned to continue at this amount and then gradually move up to a full serving. The purpose is not to desensitize, but to slowly reintroduce the food to the body, since it hasn't "seen" it in about 6 years. We just want to continue "low and slow" and give her body a gradual reintroduction to her long lost flax. I think both doctors feel she would likely pass a full challenge, but I'm good with taking it nice and slow.

I've relied heavily on IgE for clues, in the past, and still look at the values, since it's all I have to look at, but more and more I realize that IgE just doesn't convey the entire immunological picture of what's happening at the cellular level. I'm hoping this is a sign that all this time in treatment has produced changes in other biomarkers that IgE isn't displaying.

The second "win" is that we also introduced sunflower seeds into her diet without incident! She doesn't have a reaction history for it, but it was one of those marked "positive, so avoid it" and it finally went down to <0.10. Her skin test from 5/2015 also didn't come out negative, but she ate them just fine. I did toast them, so that might have helped, some, too. We also had another year of treatment under our belts.

Even though these aren't common, "major" allergens, they are a huge deal for us and we are so happy to have made this progress.  I am still just amazed that she is able to eat anything with flax in it. I was just hoping not to worry about cross-contact. It's hard to really feel like I can "trust" any food, completely, but we move forward with cautious optimism!