My daughter had a sesame challenge on May 11th and she passed! I posted about it on a Facebook group, but just realized that I did not blog about it, here. :O It also felt surreal for her to pass the challenge, so I kept waiting to make sure it was "real" and so far, so good! 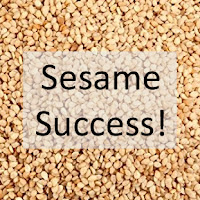 Sesame has been on my list to challenge, for quite a while, and we finally got around to it. It can be so hard to find a time to plan one when you don't have other things going on, but I realized that I really need to get going on these, or it will take forever to get through them all.

Sesame fell into the category of "high IgE but no reaction history". Her IgE to sesame had been as high as 15, then was almost 3 before treatment and then dropped down and hovered in the high 1s, low 2s.

Back in 2015, we did skin prick tests (SPTs) for a few foods, including sesame and flax, and they came out positive, so we were told it wasn't time for a challenge, yet. As time passed, I felt that the SPTs were lagging indicators and I also felt that the IgE levels just weren't going to get to be negative. Treatment with Dr. Li's protocol seeks to regulate the immune system and after a while under treatment, standard IgE testing becomes less and less easy to read as an "up bad/down good" indicator. Though there is an expectation that IgE will fall over time, it may never get back to a pre-allergic level. There's a long story there, but for now, let's focus on the sesame challenge.

For the challenge, I made "tahini cookies" which are pretty much peanut butter cookies using the tahini (ground sesame seeds) in the place of peanut butter. I used the Kevala brand, as their tahini is made in a facility that only processes sesame seeds. I chose tahini, over sesame seeds, because I had read that people sometimes have delayed reactions, when the stomach breaks down the outer seed and gets to the protein. Even with as nervous a person as I can be, I wanted the highest-protein version, so I could be sure that any other forms would only be a lesser risk.

Throughout the challenge, my daughter didn't really have any major issues, thankfully. She sprouted this light pink spot she gets, sometimes. I can't even call it a hive, because it's so small and not raised and it vanished before I could even load my camera option on my phone. Somewhere into the second dose, though, I did see her shrug her right shoulder toward her ear and she was headed toward her ear with her "pinky" finger. I asked her not to touch her ear, but I got the sense it was a bit itchy. I took pictures of both ears and noticed that the right one was a bit pink (more so than really shows in the picture, but not bright red, either.) The funny thing is, when I had some of the same cookie batch the night before, I had an itchy right ear for a bit. :P Anyway, I told the doctor, and she decided to make the next "dose" a little bit smaller. The subsequent "doses" were all fine and her ear went back to normal, without intervention.

They had us wait 1 hour after the last dose, but said we could go after that, since it went so well. During the 1-hour waiting period, her cheeks were a little pink, but she was lying down, so tired from having gotten up early. The pinkness didn't last and I've seen the same pinkness on many days when we haven't done anything out of the ordinary.

One thing that did calm my nerves a bit, even though it's not definitive, was that she is negative to Ara h 1, which has 80% homology with Ses 1, one of the main sesame proteins. I told myself that it boded well for her challenge, but I also don't want anyone to fret if their child is Ara h 1 positive, when it comes to sesame. She eats plenty of legumes that are supposedly "botanically cross-reactive" with her other allergens, so it's all relative.

I'm happy to cross another food off the list and hope to narrow things down to just the "big ones". She also passed a home "challenge" of fish (Ian's fish sticks). Cod tested negative, always, but I was nervous about fish. The Ian's fish sticks are actually pollock, but it was still OK. She's also still happily eating pinto beans, which were positive on that SPT a couple of years back, so I still look at SPTs sideways. :Þ