I know the bulk of my time on here is spent dealing with issues relating to my daughter being atopic, but this blog is titled, "Amazing & Atopic", so allow me to discuss something from the category of "amazing".

My daughter amazes me all the time, but here is today's example.  My husband was working on a headband craft with my her and they had a pen to trace her hand print.  She took the pen and said she wanted to write "DADDY" on the headband, so he told her the letters and she wrote them all by herself!  She then asked to spell "BUNNY" and wrote that, too.  She added an extra "u", but, hey, that's still pretty good!  After that, my husband asked her if she wanted to write "cat" and she spelled it out and wrote it down, all by herself, without him telling her the letters!  To me, that is pretty amazing!  She just turned 3 last month and she has been able to write some of her letters for quite a while, now, but I have never seen her write down a word, all on her own.  Woo hoo! 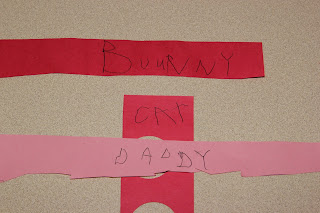