Given that I'm going to discuss medical devices, I would like to direct you to my disclaimer page, before we proceed.  I am not a medical professional!

I know they don't like to label young children with "asthma" and call it "reactive airway disease", but I will often refer to my daughter's breathing issues as "asthma".

The website AsthmaFreeLife.com has a good explanation of the difference between "extrinsic" and "intrinsic" asthma:


Asthma is generally split into two categories: extrinsic and intrinsic. Generally speaking, extrinsic asthma is an allergic reaction and intrinsic is non-allergic. Basically, allergic asthma (aka extrinsic asthma) is caused by environmental factors.
Allergic asthma occurs when something foreign enters the body through inhalation. These foreign things are called "allergens" or "antigens," and we breathe them in.
When this happens, the body overreacts. The immune system kicks in, to get rid of these usually harmless particles.
Unlike intrinsic asthma, extrinsic asthma often begins early in life, often in childhood. Asthma, especially extrinsic, is one of the most common chronic childhood diseases. By adolescents, most extrinsic asthma sufferers are aware of the problem and have already sought some kind of treatment.
The only difference between non-allergic and allergic asthma are the source of the trigger. The reaction of the lungs and immune system is the same in either case. Understanding the way allergens come into the body is the key to treating the problem.

So, as I see it, my daughter has extrinsic asthma.  I'm hoping this means that as long as I can keep her away from her triggers, we should have less and less breathing issues.

I thought I'd take a moment and share some of the gear that we keep around the house (and at my parents' house).  It's really not very expensive to keep your home stocked like a mini-hospital!

After the "milk incident", we were given a nebulizer to take home.  It has been great for keeping the excessive coughing at bay and treating her milder breathing issues when she has a little cold.  It saves us from having to make a trip to the ER or doctor's office (though I certainly have her checked out, when needed, but it's great for minor and/or late-night issues.)

After we were given the nebulizer to take home, I looked into getting a pulse oximeter.  (It's the little thing they put on their finger to check their oxygen saturation levels.)  Here is some information from Wikipedia:


A pulse oximeter (saturometer) is a medical device that indirectly monitors the oxygen saturation of a patient's blood (as opposed to measuring oxygen saturation directly through a blood sample) and changes in blood volume in the skin, producing a photoplethysmograph.
...
A blood-oxygen monitor displays the percentage of arterial hemoglobin in the oxyhemoglobin configuration. Acceptable normal ranges for patients without COPD with a hypoxic drive problem are from 95 to 99 percent, those with a hypoxic drive problem would expect values to be between 88 to 94 percent, values of 100 percent can indicate carbon monoxide poisoning. For a patient breathing room air, at not far above sea level, an estimate of arterial pO2 can be made from the blood-oxygen monitor SpO2 reading.

I found a pediatric one online, since toddler fingers are considerably smaller than adult fingers.  You can find regular ones at Walgreens, though.  Whenever I feel like she might be a little wheezy, I will check her out, just for my own peace of mind.  To get a good reading, she has to keep her finger in it and remain still until the heartbeat readout has been steady for a good minute or so, which can be tricky, but I can usually get it done.  Most times, it just helps me feel a little better, knowing that her oxygen levels are OK, although you certainly shouldn't base all treatment decisions on that one device's reading.  Usually, when they need medical care, you'll know without a device telling you so, but I'm a fan of gadgets or anything that will give me a readout.

Since my daughter spends time at my parents' house, my father suggested that we get them a nebulizer unit to keep there, so I wouldn't have to cart it back and forth, and we'd also have it if we needed it unexpectedly.  I looked online and bought them this one, which is just like the one given to us at Urgent Care.  We use the "fishy mask".  I let her control as much of the process as possible, holding the mask, pressing the on/off switch, etc., to gain her cooperation.  She's old enough to graduate to the mouthpiece, but she hasn't shown any interest in it, yet.  Luckily, we don't have to do very many treatments.

I'm really surprised that pediatricians/allergists don't recommend/prescribe one to have at home, as soon as you get any kind of asthma-related diagnosis.

We also bought a car power inverter, so that we can use the nebulizer if she ever needs it while we're on a long car trip.  For the PARI Vios nebulizer, you need one that's at least 80W to power it, like this 150W unit: 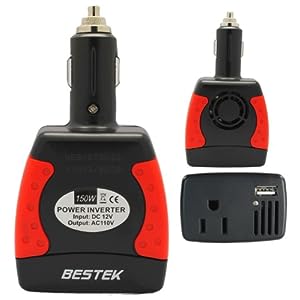 If anyone else uses any home-treatment devices, I'd love to hear about them!